Our understandings of landscapes, particularly English landscapes, are often romanticized with images of golden, rolling hills, mounted by trees that scatter the horizon. However, who is to say that a landscape even has to be natural? That it cannot consist of silver skyscraper buildings, or the sounds of wheels and chatter that serve to invade our ears. Perhaps a landscape is not even entirely visionary; it is also what we hear, and taste and smell from the plants or people in it. Nevertheless, before we attempt to understand a landscape, I believe that first we must understand ourselves, and how we embody our surroundings. As Mead notes the human scientist has had to learn how to cultivate self – knowledge of him or herself as a multisensory being, and how to include such disciplined self – awareness in observations on life [Ruby.34.1981]. When journeying into the South Downs, I sought not only to understand the different forms of landscape, as well as the distinctions between the artificial and the natural, but also how I, as an individual, related to my environment and thus the production of a sensory ethnography.

The Idyllic notion of Landscape

Journeying into the South Downs

When we study primitive societies we see ‘human-nature relatedness in terms of personal relatedness within a subject – subject frame’ rather then the ‘subject-object frame’ [Bird.112.1993] that we, as students, experience nature through. On campus we walk along thick concrete pathways that cover the surface of the earth, and see trees specifically and selectively planted in accordance with architecture. In many ways we objectify nature in urban landscapes, Ingold writes that life in cities is truly lived on or above the ground and not in it [Ingold.6.2010], which indefinitely applies to Sussex campus. I believe that cities can numb our senses, as we are guided by rationality to shops or events that require logic and decision making, without regard to our sensory experiences. We, and our senses, are one of the most vital parts in the production of sensory ethnographies; Pink argues that in doing sensory ethnography, ‘we are entangled in place-making processes’ through the ‘routes and pathways’ we chose. [.Pink.179.2013]. So, before we can learn about our landscapes, I argue that first we must take note of ourselves and how we perceive and interact with our surroundings. By learning to be mindful and use our senses, in both urban and natural landscapes, we start to notice the endless entities around us that contribute to the landscape.

Perhaps the reason walking can be so appealing to urban citizens is because “as one enters the variety and movement of the outside world, the space for interior wandering also grows” [Robinson.1989]. The way in which we objectify nature in cities can serve to give individuals a sense of empowerment over the natural [Hornborg.62.1996], which is perhaps why we don’t always regard urban environments as landscapes too, as we learn to associate landscapes with the natural. However, the Earth Ship, located in Stamner Park, proves that an artificially constructed landscape can work harmoniously with nature, as it functions by using the earths natural cycles for sustainable living. Hornburg argues that explicit knowledge and rationality are insufficient tolls for the sustainable management of ecological relations [Hornburg.47.1996] yet the Earth Ship defies this. The Earth Ship collapses the dualities of what is natural and manmade to create a very unique landscape that exists outside any previous understanding what can be natural or artificial that I had before. For an example, the electricity used is ‘harvested’ [Earthship.2014] from the sun and wind. By building the Earth Ship on a ninety-degree angle, it means the Earth Ship can take in an optimum amount of sunlight to then generate more power. When one is living in an Earth Ship, they are very much living within a landscape, despite its artificial construction. The uniqueness of the Earth Ship encourages one to perceive the landscape with a special attention that is often not found within the landscapes we inhabit, thus demonstrating the allure of being in nature.

The Earth Ship, some what Similar to the Teletubby house

the Interior of the Earth Ship

Originally I assumed Stamner Park, with its tall trees and rolling hills, was a natural landscape. However, it is yet another example of how humans can objectify and construct seemingly natural landscapes. When built in the 1720s, it artificially transformed its surroundings, such as by levelling the land for a bowling green [Berry.242.2005]. The construction of a ‘wilderness walk’ involved selectively planting trees and creating man-made paths. The alteration of Stamner Parks grounds represent the authority that we have over our surroundings, not just through action, but also through senses such as sight, as the landscape was orientated to be an all encompassing view from Stamner House. Foucault’s theory of panopticon explains that when a view is all encompassing of surroundings, it subjects surroundings and empowers the onlooker [Hollinshead.17.1999] thus we are empowered through our sense of vision when looking out from Stamner House. In accordance with Foucault, Ingold argues that when placed at a particular point, a perceiver can acquire a more or less complete knowledge of things lying within the circle of the horizon [Ingold.133.2010]. The focus on visual perceptions of landscape, although informative, represents bias of ‘head over heels in influencing the psychology of environmental perception’ [Ingold.331.2004]. We must remember to use our other senses in environmental perception too, such as sensation in our body.

Using our eyesight and other senses

I very much felt the alertness of my eyesight in formulating an opinion on Stamner, before I had allowed my senses to familiarize themselves with the feeling of gravel beneath my feet, sounds from the town, or any of the other entities that make Stammer’s landscape. To notice the tendency that some of our senses have to take us away, is to notice the distinction between body and mind, and recognise how our minds can be biased in the formulation of sensory ethnographies. Pink argues that both our minds and bodies have distinct roles in producing experiences [Pink.4.2009] thus if we are to produce accurate sensory ethnographies, I believe we must understand not only how knowledge is produced rationally but also how the body comes to know through movement and other senses. Anthropologists have continuously linked walking and the production of knowledge, by arguing that it is by ‘walking along from place to place, and not by building up from local particulars, that we come to know what we do’ [Ingold.2.2010]. But if we are to truly experience such knowledge, we must learn to become aware of how we are walking, what the body is doing, and what the senses are experiencing. Howell argues that it is the mind that is cultural, and the body that is natural [Howell.127.1996], thus learning to listen to our bodies is essential if we are to fully understand a landscape.

When I drew this picture of the trees, I took the time to become mindful, and noticed the sound of them rustling in the wind, and how smells from the earth were stronger after being in the sun

Becoming mindful of my bodily experiences whilst walking through different terrains taught me more about the true nature of landscape than my eyesight alone could have. Sennett argues, “the body comes to life when coping with difficulty” [Sennett.309.1996.] which rang true as I walked up West Hill. I felt the strain of gravity pulling against my legs, the strain in my back as I climbed up, and the weight of my body pushing against the firmness of the earth. The ascent portrayed how landscapes make us use or bodies in certain ways, suddenly making us more aware of our bodies’ [Edensor.102.2006]. Without this internal struggle, I wouldn’t have recognised the true sensations of being elevated once at the top of the hill; the feeling of wind, the sounds being carried from areas all around, and a general lightness in the air. When experimenting with walking alone in single file, I felt unison with my natural surroundings, portraying how others contribute to how we experience landscapes. Mitchell argues, “when you are really walking, the presence of a companion disturbs the harmony of body, mind and soul… made one together in mystic harmony with the earth ” [Mitchell.1979.61]. The varying ways in which I experienced the landscape through my body portrays how we, in our unique experiences, are very much apart of the ethnographic contexts we write in [Pink.179.2013] thus must always learn to be mindful of ourselves in relation to our surroundings, to understand how we effect the outcome of our findings. 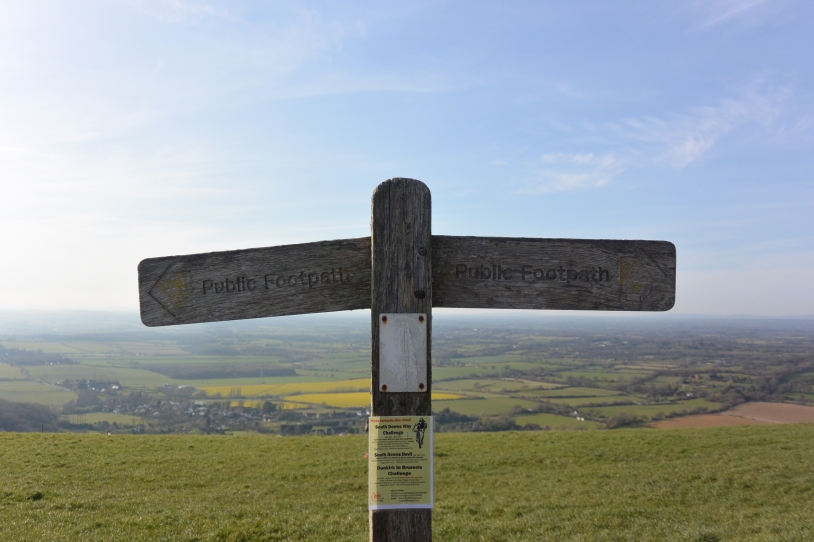 Just as we mold the landscape, it also molds us, as for the duration of the trip we walked mainly along mapped paths which Edensor claims produces ‘highly coordinated, collective movements’ [Edensor.107.2006]. When walking off path during exercises of experimental walking, I noticed another medium that lay between the landscape and myself– my shoes. Whilst allowing me to walk on any terrain I chose, my shoes also dictated my bodies positioning and how I interacted with the landscape. My shoes represented the modern discourse of human domination of nature as they gave me freedom in my movement, however they also represented how manmade intelligence triumphs over instinct [Ingold.321.2004], as they required little thought or action from me. In conclusion, I challenge the notion that walking is the detachment of an individual from their usual social structure and from the culturally constructed self [Edensor.105.2006]. I believe that when we cultivate self – awareness, and use this to actively embody a landscape, we learn so much more about a landscape. However, I believe that regardless of how much self – awareness we cultivate, there will always be other cultural influences that dictate how we interact with and perceive a landscape. Be it through technologies, such as our shoes, our partiality in which senses we use, our experience of landscape is always subjected to ourselves, and it is only by learning to become as mindful as possible that we can have the most enriching experience.

A new experience of Nature 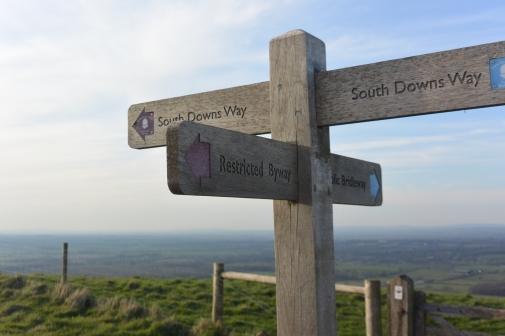